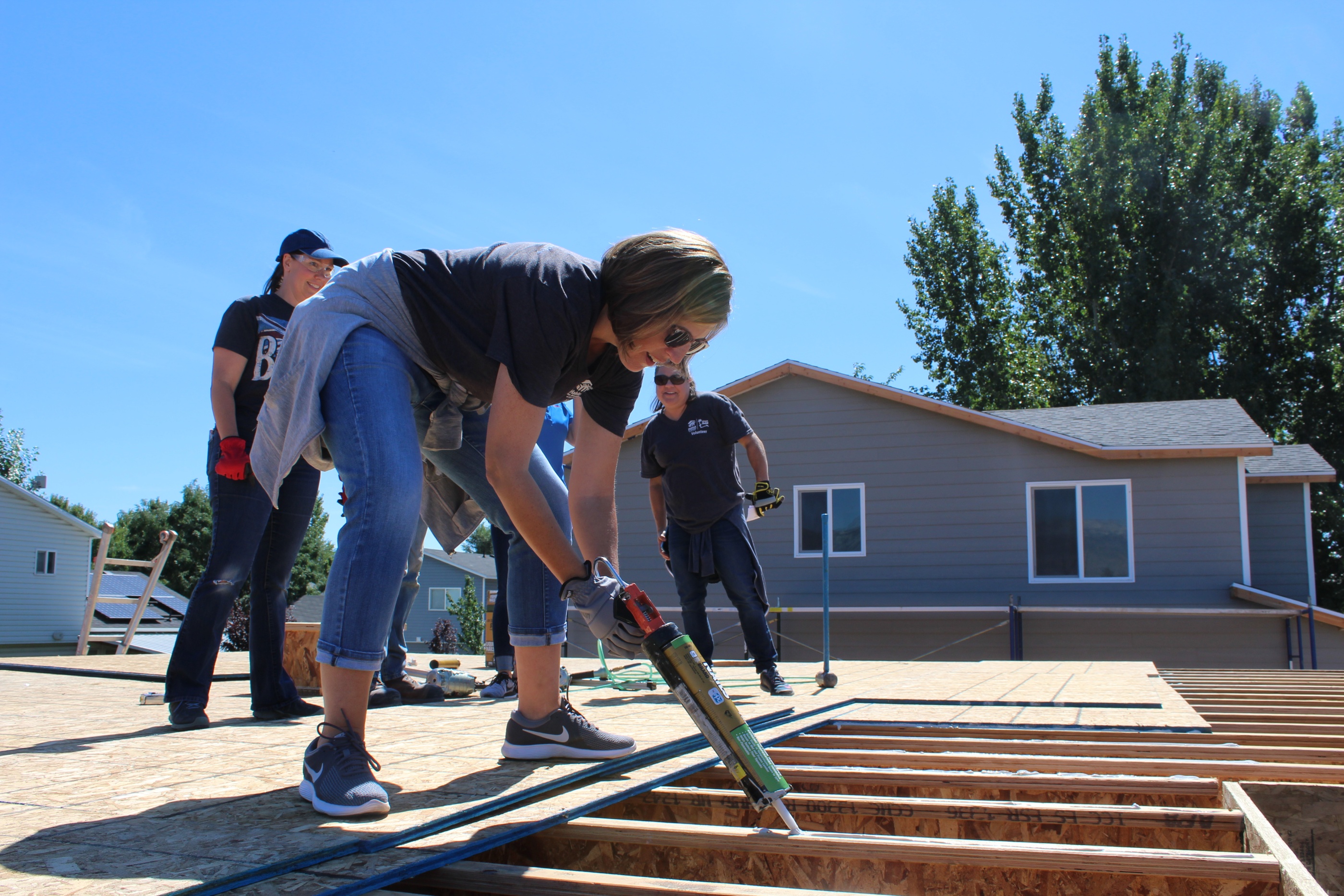 Two families living in substandard housing are close to getting their own new homes, thanks to Habitat for Humanity of Utah County and the volunteer efforts of folks in the real estate industry, including women Realtors.

A two-parent family with three children has been living in an 80-year-old home for 10 years. They share the one bathroom and the children sleep in a basement utility room. The living and dining room are the same room. To complicate matters, the home has plumbing and mechanical issues and concerns including rodent infestation, lead paint and asbestos.

The second family and soon-to-be-neighbors consists of a single-mother with two children who now share an aging one-bedroom mobile home with her parents. The mother and her children share the one bedroom and one bathroom with the grandparents who turn the living room into their bedroom each night.

The five-lot subdivision on a cul-de-sac at 1580 West in Orem was once part of a century-old dairy farm. Habitat for Humanity, a charitable organization, purchased it nearly two years ago and has been developing the lots, getting them ready for construction, noted LeAnn Hillam, Volunteer and Family Services Manager for the self-help organization.

Lots are difficult to buy” in the current market, she said. “These came at the right time (and) it gave us five lots.”

Habitat for Humanity often buys lots that are passed over by other homebuilders because they are either an odd shape, too small for the average new home or not as desirable to commercial builders.

“We can be creative. We can think outside the box,” Hillam said.

The average Habitat for Humanity home measures about 1,500 square feet and has three bedrooms, two bathrooms and a two-car garage. They cost about $160,000 to build, up from $100,000 just a few years ago.

Habitat for Humanity takes in donations from local individuals and companies, including a $5,000 grant from Coldwell Banker Residential Brokerage, to help pay for them and holds the 30-year mortgage rather then selling it, which is common in the mortgage industry. It then uses the money from previous builds to help fund future builds.

Families must pass a three-tired qualification process to purchase one of these homes. They must show that they can make a monthly no-interest payment, about 30 percent of their income, must be living in substandard housing and must be willing to help build the homes. A home visit insures that their current housing is substandard.

Also required is a 16-week financial education class, totaling 32 hours and the future homeowners must graduate from a home maintenance class taught by Scott White at Habitat’s ReStore in Orem. The white bearded, Santa-like White also instructs volunteers in the home building process. Another ReStore is located in Spanish Fork.

Volunteers, do much of the work on the homes under the guidance of Habitat’s tiny construction crew. They include professional subcontractors and Realtors such as those in the Women Builders Club and others in the real estate industry, regardless of gender.

The Women Builders Club formed out of a national Habitat for Humanity effort called National Women Build Week that launched in 2008, which encouraged women of a variety of backgrounds to get together to donate and help Habitat for Humanity families build homes. In 2016 that spun into local groups called Woman Build, consisting of 10-12 women (or men) per team.

Many are Realtors, but they can come from anywhere, Hillam said. Their male counterparts are also invited. Each team raises $1,000 for each build. The focus is no longer on building just one home, but could be several homes. Some real estate agents donate a small portion of their commissions to the program, noted Realtor and backer Kristy Dimmick.

That effort resulted in the Women Builders Club. Their slogan now is “Every Woman Has the Power to Change the World.”